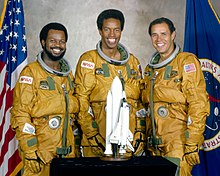 I recently saw Leland Melvin’s new book Chasing Space and got a chance to look it over. It’s a good book, although in full disclosure I won’t finish it. I read and write for a living. so my time is limited. Additionally, I have already read more than dozen astronaut bios, so this one lacks newness for me, even though it might be just what you are looking for.

It got me thinking about the first black astronaut, if there were such a thing. We all know who the first woman astronaut was — Sally Ride. That is, if we continue our cold war prejudice against the Russians and ignore Valentina Tereshkova.

It would be neat and tidy if there were a first black astronaut, but it isn’t that simple. If you type the question into Google, it will return Guion Bluford. We’ll talk about him in a second, but there were others that came before him.

Ed Dwight was chosen by John F. Kennedy to join the astronaut corps. He was an Air Force test pilot with a degree in aeronautical engineering. While in training, he was the target of racism. When Kennedy was assassinated, Dwight withdrew from the astronaut program. A few years later, continued harassment led him to retire from the Air Force altogether. He became a noted sculptor in a second career.

Robert Henry Lawrence Jr. was the next African-American astronaut. At Edwards Air Force Base, Lawrence investigated unpowered glide return characteristics using an F-104 Starfighter, contributing greatly to knowledge necessary to the Space Shuttle program. He was assigned to the Air Force’s Manned Orbiting Laboratory program, but before he flew in space, he was killed in a crash landing while acting as a pilot instructor to a trainee. When the MOL project was abandoned, many of it’s astronauts transferred to NASA, where they became the backbone of the early Space Shuttle missions. Lawrence would almost certainly have been among them.

The “first black astronaut” falls out this way.

Robert Lawrence Jr. was the first black working astronaut. Remember that most of any astronaut’s time is spent in training and on-the-ground research. Actual flight in space makes up a tiny fraction of an astronaut’s career. Lawrence was as much a real astronaut as Roger Chaffee who died in the Apollo One fire just before his first flight.

Guion Bluford was the first black astronaut to actually fly in space in 1983 aboard the Challenger. He participated in four shuttle flights.

We also have to add Ronald McNair to the list of firsts. He was the first black astronaut to die on a space mission, when Challenger exploded. It was his second space shuttle mission.

Before 1978, there had been fifty-some American Mercury, Gemini, and Apollo astronauts and an additional few dozen assigned to other missions. Of, these only Lawrence had been black and there had been no women.

There are an additional eight who, for various reasons, never flew is space. Lawrence and Dwight are on that list.