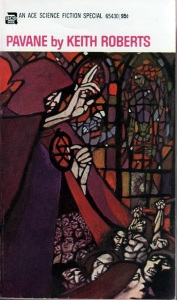 During the Golden Age, most science fiction was in the form of short stories, published in science fiction magazines. When paperbacks became popular, there was a need for novels, mostly short by modern standards. Authors and editors mined the SF magazines for interrelated short stories that could be linked together and somewhat rewritten to appear as if they were novels. They became known as fix-up novels. The next three on my best list are all fix-up novels: Pavane today, The Road to Corlay (set for April 17, but these things sometimes change), and The Traveler in Black this Wednesday.

Pavane by Keith Roberts (publication date 1968) is not to everybody’s taste, but is one of my all time favorites. It is an alternate universe novel, set in the twentieth century in a world where the Catholic Church has maintained its power. The universe-changing event was the assassination of Queen Elizabeth the First, shortly before the arrival of the Spanish Armada.

Of course, the people of Pavane don’t know that they are an alternate. Their world is simply the world. Other than a brief introduction, the novel is written from that perspective. Things are explained, as they must be in any novel, but only enough that someone in the world of Pavane would understand.

(If I wrote a story about a blacksmith, I would explain enough that a college student could understand, not enough for an alien from Alpha Centauri to understand.)

This makes Pavane a bit challenging, but Roberts does his job well. The challenge is slight, and the reward is an abundance of ambiance.

Pavane takes place in a cold, hard world, and the characters fit their situations. Jesse Strange, in the first story The Lady Margaret is so dedicated to the family business (haulage by steam road waggons) that he passes up love and ignores friendship. Rafe, the student signaler, is engaging, but doomed. The story of the artist Brother John is positively grim.

All this sounds like I’m saying, “Don’t read this book,” but in fact I give it my highest recommendation. You will be forced to confront this alternate culture by digging deep into what makes it work, and any time one has to learn another way of thinking from the inside, the mind and the heart are enriched.

The ending called Coda is a disappointment. Roberts gets up on his soap box for a brief but embarrassing moment to try to justify his culture. Cultures don’t need justification; they just are. And every one of them, including yours and mine, is a mixture of joy and horror.

Probably the most notable part of the novel is the sheer beauty of the writing. At least, that is my take. I have found beauty of writing to be extremely subjective, but Pavane hits the sweet spot for me. I invite you to see if it hits yours.

One thing for sure. Thirty pages in, you will already know if you love it or hate it.

Pavane is available used or e-book from Amazon, or if you are lucky at your local used book store.