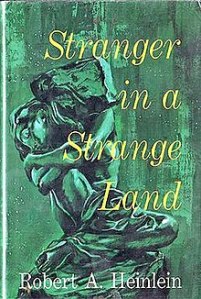 Heinlein did not invent group sex, but he tried to take out a patent on it.

(Disclaimer: I made that up about the patent. It’s called hyperbole, the use of exaggerations and untrue statements for effect. The difference between hyperbole and lying is that in hyperbole, you don’t expect anyone to believe you.
If you offer exaggerated or untrue statements with the style, cadence, and straight face of hyperbole, but you expect to be believed, that’s lying disguised as hyperbole. You may have seen this happen recently. At least one of our leaders makes it public policy.)

The world first became aware of Heinlein’s preoccupation with group sex in 1961 with his novel Stranger in a Strange Land. I didn’t buy in; I couldn’t accept the underlying idea. A successful family of multiple males and females didn’t seem likely. Most 1+1 marriages fail, and a lot of the ones which don’t fail, should fail. The idea of a whole passel of people living together in one big happy sexual family without exploding from the stresses generated strained my willing suspension of disbelief.

Hippies tried it a few years later. It was a lot of fun for the alpha personalities, but not so much for the shy ones who just went along with the idea. Communes tended to fall apart quickly.

Kings often have multiple women. In the orient, they called them harems. In the west, they called them mistresses. But any family of the 1+n style can’t be very successful. It will always result in one tired guy and a lot of women feeling blue and lonely.

Heinlein multiplied his multi-person families throughout the rest of his career, and to be fair, he did once portray such a family falling apart in the novel Friday.

Let me paint you a picture.  Start with a bunch of naked people. The men are okay looking and the women are beautiful. No exceptions on that issue. They are all young; that part is easy enough since they are all Howards and therefore semi-immortal. Put them in a luxurious lounge, with self-aware computers attending to their every whim. Now let the sex begin — but it doesn’t. Instead, we get endless, interminable, unquenchable talking about sex.

I read Stranger in high school. Three years later, in college, The Harrad Experiment was all the rage. It was about a school which encouraged its students to experiment with free love (as it was called in that era). My roommate read it and complained, “They don’t do it; they just talk about it.” I can’t verify that statement. It sounded so much like Stranger that I gave it a miss.

(Disclaimer: Heinlein is one of my favorite authors. I re-read him more often than anyone but Zelazny. On the subject of sex, however, he sees the smiles and ignores the strains. For him, the cup is neither half-full nor half-empty. It is overflowing. It’s a nice idea, but it strains my credulity.)

When I wrote Cyan, two kinds of multi-person families showed up. Saloman Curran was the product of a ring family. That appears first in Chapter Six, Stranded on Earth [3] in the odd way that book is laid out. Ring families were a disaster for adults and children alike, and their structure goes a long way toward explaining why our villain was so villainous.

The ten explorers who set out on their multi-year journey to Procyon were a family of another kind, and one that worked out fairly well. They were young, healthy men and women, cut off from contact with any other humans, and stimulated by the excitement and danger of exploration. Sex was sure to happen anyway, so NASA made sure they were compatible during training. Read between the lines of that statement. I didn’t set the situation up for titillation; I was working out what I thought might actually happen. Once the explorers returned to Earth, the ten-some did not last. It had existed due to a particular situation, which was not likely to be repeated.

(Disclaimer: Yes, I know this was supposed to be the future, yet the explorers are all apparently hetero. I started Cyan in the early eighties for that audience. If I were writing it today, I would have to change some things, but it’s really too late now.)

Heinlein was trying to shake up a moribund society, and make it look at what might happen. I was trying, a generation later, to figure out what probably would happen.

Briefly, back to hyperbole as humor. Once in a meeting, I said with a straight face that, “Only stupid people exaggerate. Smart people use hyperbole.” Most of my friends just looked at me (that happened a lot). The one friend who got it, roared.

Yes, I know. It isn’t funny in cold print. It’s all a matter of timing.