Okay, folks, no excerpt from Jandrax today. Instead, it is time for some world building. But first, a paragraph from yesterday’s post:

Captain Childe confirmed Jan’s suspicions; the melt would come twice yearly, but the herds only accompanied one melt. When the green latitude moved northward, the herds would follow the opposite shore of the lake. 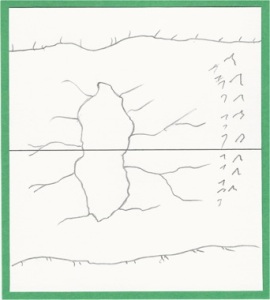 Now let me apologize for the map. The draw portion of Apple Works wasn’t up to the job and I haven’t yet downloaded EazyDraw, so after decades of using computer graphics I was reduced to a paper, pencil, and scan.

The unharmonious planet called Harmony has an axial tilt of 32 degrees, enough greater than Earth to make the seasons extreme. It lies “close in to a cool sun” but we won’t worry about that, because I didn’t know that we were going to be dealing with two sets of seasons per year when I wrote that description on the first day of the first draft. Let’s just assume that we have a year roughly the same length as Earth’s. I also won’t repeat what is meant by two sets of seasons.

The heavy tilt makes the seasons extreme, but glaciation comes from the cool sun. Glaciation has locked up most of Harmony’s water, making the oceans small and salty. The landing site is inland near a large, freshwater lake.

Because Harmony is cold and water starved, with universal low humidity and no mountains nearby, it never rains in the vicinity of the landing site. It does snow during the coldest months, and this accumulates until warmth returns. This is the melt, during which plants grow.

Let’s watch the cycle from space, beginning with chapter one. The sun is overhead some degrees north of the equator, and moving southward. At that latitude, there is a world girdling band of melting snow. South of this, all is snowbound. North for a hundred miles, give or take, is a band of green and growing vegetation, briefly flourishing on snowmelt; further north still is a band of desiccated land reaching all the way to the face of the glaciers. In the green belt, the herds are happily munching their way southward on the east side of the lake only.

As the sun moves southward, the line of melting snow, followed by the band of growth, followed by the desert left after the snowmelt drains away, trails out behind. Snow begins in the far north, and becomes another southward trending band, following the dry belt. By the time the sun reaches its most southernmost excursion, snow covers the land to well below the equator. Now the sun starts northward, but it will be some time before it reaches the southern boundary of the snow and begins a new, northward-marching melt. What are the herds to eat until then?

They will have to eat the unsavory, dried out remnants of vegetation from the previous melt – which exists only on the west side of the lake -until the reach the latitude of the new, northward melt. You’ll see this happen quite late in the novel.

How did the all come about? Did it evolve as the planet cooled? Did the God-of-the-island plan it all? You’ll meet him late in the novel, too, unless he was just a hallucination. In any case, it’s up the the reader to decide. I just work here.

Now wouldn’t it be a horrible mess to dump all this onto the reader as an undigestible narrative lump? Does he (or she) even care?  World building is a means, not an end, and you have to feed it to your reader in digestible bites, as needed.

One last thing. There is something in all this that doesn’t add up. Did you see it? No? I’ll tell you what it is after the weekend. See you then.