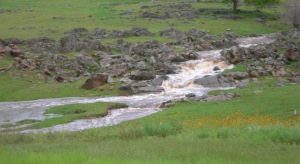 What is weather to a writer? If you live in the city, it might invoke a passing mood,. Beyond the city, where I live, it is everything.

I grew up on a farm, living in the glorious outdoors sixteen hours a day for half the year, and the other half freezing my #%*# off six hours a day milking cows. Weather was everything. Through the middle of my life, when I lived in cities, weather was mildly interesting. Now I live on three acres in the Sierra foothills, and weather is back with a vengeance.

I posted a picture at the top. This is an fold in the hills which is dry ninety percent of the year, and recently has been dry all year for half a decade. This is what it looks like now.

The drought has broken. Grass is green and knee deep in my yard. Yesterday was Valentines Day or, as my wife and I call it, the first day of spring.

That began as a joke. When we first came to where we live now, I bought her a tomato plant and we planted it together on Valentines Day, with high hopes and no expectations. A few months later we were eating tomatoes from it.

It doesn’t always work that way. In another year, a hard freeze on April 15th killed everything in the garden. Taxes and a hard freeze on the same day — it seemed appropriate. Life is like that in the real world. Sometimes you get the bear; sometimes the bear gets you.

If all this talk of green grass in February is making you jealous, take heart. By May, the rains will stop and they won’t return until winter. When you are having a picnic in June, on green grass under the trees, with cool breezes, here in the foothills it will be a hundred degrees with dry brown hills in every direction. The rattlesnakes will be carrying their canteens again.

But for now, the drought has broken. The grass is green, the weather is clement, and the lakes are full. And my novel Cyan is due out this summer, after the long dry spell since Jandrax and A Fond Farewell to Dying.

The drought has broken. Finally.

I have to offer a PS to my metaphorical connection of our breaking drought and the end of my publishing dry spell. Three days after I wrote this post for today’s release, the Oroville dam about two hundred miles north of here, hit the national news for excessive water and a failing spillway. Be careful what you ask for.