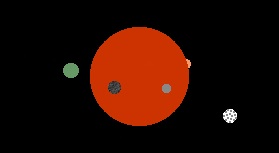 About a year ago, I said:

(T)he party is nearly over. We now have the capacity to discover extrasolar planets, and new ones are found every year. Fortunately for latecomers to the planet builders guild, megaplanets are easier to find that Earth sized ones, and NASA keeps cutting funding. Still, it won’t be too many years before you can’t decide for yourself where, within the limits of orbital mechanics, you want the planets of Alpha Centauri or Procyon to be.

Science has a way of getting somewhere a lot faster than you would expect. Manned space exploration doesn’t fit that statement, because it runs on politics, not science.

On February 22, in Nature, it was announced that seven Earth size planets had been discovered circling a single star only thirty-nine light years from Earth. Far more important, all seven orbit within the band of temperature where liquid water is a possibility. By contrast, our system has one such planet, Earth, and maybe Mars for a few minutes on a hot afternoon near the equator in mid-summer – if the ice doesn’t sublimate instead. Seven; its unheard of.

The star is TRAPPIST-1, an M dwarf.

In fact there has been a mini-revolution in the search for exoplanets. NASA’s Kepler space telescope has found more that 4700 potential planets. Many of these will no doubt turn out to be false positives, since the techniques of the search are not perfected, but it is still a staggering number. Most of these were found around stars similar to our sun – where else would you look first? Very few of them are both Earth sized and at the right distance from their star to have the possibility of liquid water.

As I said in Cyan, “planets of no use as real estate.”

Since a mechanical failure in 2013 compromised its ability to orient itself, Kepler has concentrated on observing red dwarfs. To eveyone’s surprise, the planet candidates found around these small, dim stars tend to be more Earth sized. And there are a lot of them.

The TRAPPIST-1 discovery, however, was not by NASA but by the TRAnsiting Planets and Planetesimals Small Telescope group operating out of the University of Liège, Belgium. That explains the use of caps; TRAPPIST is an acronym.

If you want details – and of course you do – the best source is here. This page from the University of Liège is in French, but the video which will self-start is in English, and gives enough details to stir the blood of any space or science fiction fan.

It took me about three seconds to start speculating about what kinds of novels could be written about the exploration of the TRAPPIST-1 system. Suppose most or all of the seven planets had some form of life, all evolving independently. Suppose we write about a paleontological mission on a planet which had vertebral life, then lost it; these dwarfs have a solar wind that operates heavily on planets so close in. Suppose at some time in the deep past, a spacefaring civilization arose on one of these planets, colonized the others, and then died out. Or didn’t die. Or seems to have died until our intrepid explorers begin to poke around.

Okay, I was wrong. The golden age is still here.