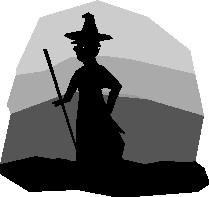 When you are ready to build your own fantasy world, you might consider these four things: tone, magic, language, and the concept of the archaic (found in posts today, yesterday, and tomorrow).

Continuing the concept of magic . . .

Christianity, in earlier centuries, saw witches as wielders of power which they obtained by pacts with Satan. Harmful as they were, witches had no power of their own. In many dark fantasies, the searcher after power obtains his heart’s desire from some greater being who is, in essence, a Satanic stand-in. Such Faustian bargains never end well.

Well, almost never. Martin does turn the tables on Satan in Robert Bloch’s That Hell-Bound Train.

Magic, in fantasy writing, often goes unexplained. The talisman in The Monkey’s Paw is understood by the reader without elaboration, just as a reader of westerns doesn’t need an explanation of how a six-gun works.

It is quite usual for a fantasy hero to have inborn power. Harry Potter was a wizard born of wizards. Ged is an unknown until his power is discovered by a mage. Corwin is a son of Amber.

It is equally usual to concentrate on the education of a wizard, or mage, or dziai. Ged went to Roke, Harry Potter went to Hogwarts, and my Tidac took two books to learn how to use his power because he had no mentor. His father never learned, and it destroyed him.

Can we have fantasy without magic? Probably not. Pavane is an alternate universe science fiction or an alternate history novel, but its tone makes it read like fantasy, except for the absence of magic. What seems to be magic in one chapter, may just be a dying dream; it isn’t made clear to the reader. For me, this places Pavane on the borderline between genres.

On the other hand, Randall Garrett’s Lord Darcy stories are all about magic, but their system of magic is so comprehensively worked out that they read like science fiction.

I know that my Menhir story, in its infancy, before I really knew what it was going to be about, read like a quasi-medieval world. Slowly I came to grips with how the powers of every soul are affixed to menhirs at death, making menhirs into gestalt beings which become repositories of power that can be tapped, at peril, by men of power. Only then did magic come into the world of the menhir. And only then did it begin to read as fantasy.

“Up sword,” sayeth Sir Gallant, “lest I cleave thee where thou standest.”

Yeah, that’s pretty bad, and it has been a long time since I’ve seen that kind of fake-ancient language used in fantasy, except as a joke.

Language in fantasy is both a necessary tool, and a dangerous one. You can’t just throw in some thees and thous and -ests, but you also can’t speak in modern, colloquial English. Simple formality is the easiest way out. Even Zelazny, for all his smart-ass-with-a-sword characters, wrote with intelligence and a great deal of formality. If you want your characters to speak slang, you have to invent slang appropriate to their world, and that takes some effort.

Remember, whatever language your characters speak, even if you are setting your fantasy in early England, no one on Earth speaks that language today. In my fantasy world of the Menhir there are three languages in play, and a mid-sea island has a bastard language drawn from all three. It doesn’t matter. The book gets translated into English, whatever language the characters are speaking.

Whatever your genre, you are likely to have characters from different levels of society. Whether you are writing about nomads from the desert encountering the Pasha of Nevermore, or a Bostonian talking to a southern slave in 1845, you need to find a way to make your characters sound different from modern America, and from each other, but still be comprehensible. And it needs to sound natural. ‘Taint easy.

Languages – note the difference – are also dangerous, but at least you don’t have to invent one if you don’t want to. Tolkien did, to a degree far in excess of the needs of his stories. Almost no one else ever does. language continues tomorrow