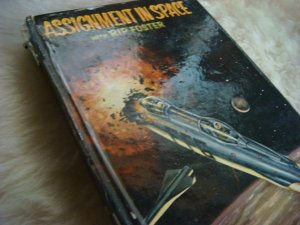 This is a shortened version of the post introducing what I call the Rip Foster book, which I had considered serializing. See the previous post for why I changed my mind.

This book is one of the best of the “this is what might actually happen” style of science fiction. I wrote Cyan in the same style. Unlike the Rick Brant books, the science in this book stands up to modern scrutiny, except for the fact that Rip’s solar system has alien life on several planets and moons.

Even though I decided to continue presenting my own work in Serial, this classic deserves to be read, even today. I recommend it to adults and boys alike. Girls, I apologize. No girls were allowed in juvenile science fiction in the fifties. Sorry. Don’t blame me; I was just a kid back then.

Today, in Serial, I (had planned to begin) the presentation of a mostly forgotten classic.

The author was Harold Goodwin. I’ve talked about him before. (see 60. Thank You Harold Goodwin and 195 Boys at Work: Rick Brant) and I have suggested downloading this particular book from Project Gutenberg.

The novel was again published by Whitman in 1958 as Assignment in Space with Rip Foster. That was the version that lit up my childhood. Denny McMains’ illustrations were superb. Golden released a paperback reverting to the original title in 1969.

If you want a copy today, a Gutenberg download will come free. An ebook version of Assignment in Space with Rip Foster is available through Amazon, with the wonderful Denny McMains illustrations, for under a buck. The novel also appears at the end of the Tom Corbett Space Patrol Megapack, without illustrations.

Original copies show up from time to time, more often in antique stores than in used book stores, for prices ranging from pennies to “you gotta be kidding”.

By the way, Rip is the nickname of Richard Ingalls Peter Foster. It was a clever way to get a cool first name without going over the top. Donald Wollheim used the same acronymical schtick a few years later when he called the character Michael Albert Richard Sampson, Mike Mars. (see 357. Mike Mars and Project Quicksilver)

Most of the authors from my youth are still in print, or in libraries. Of the books that I loved then, which have since been forgotten, Rip Foster stands out as the best by far, as well as being the only one which was not part of a series. It deserves to be revived, and this seem(ed) the right time for me to do that.

And, yes, it is in public domain. I don’t steal from other authors.