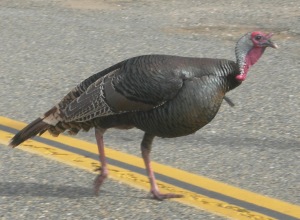 Those who have been with me for a while know that I often give you a glimpse of the life going on outside my door. It’s time for a new installment, because Gobbles came back recently, and I had missed him.

Gobbles is a wild turkey. As I’ve mentioned before, there is a flock of about thirty wild turkeys who come through our acreage about every three days and usually spend an afternoon. A little over a month ago, one of them stayed behind. He was crippled. He carried his left leg bent so that it never touched the ground. When we became aware of him, we were careful not to approach to closely and scare him into leaving.

He took up residence, primarily in our fenced back yard. At first I tried to keep a gate open so he would not be trapped, but then I saw him fly and there was nothing wrong with his wings. After that, we left him alone, talked softly when we were near him, and enjoyed his company.

We wondered where he slept, concerned that he would be vulnerable. We needn’t have worried. After about a week, we happened to be looking the right direction at sundown and saw him fly up into the giant oak tree above our garden. It took him two tries, first to a lower limb and then to a limb near the top. And he had to land carefully with only one functioning leg. Once there, he was as safe as any in the flock he had had to leave.

After a couple of weeks, he started putting his left foot on the ground, but without weight. Then he began to hobble and eventually he hobbled fairly well. Every few days, the flock would come back and he would be with them for a few hours until they left and he had to stay behind.

Then he disappeared. Three or four days later, the flock was back in our yard and one of the turkeys was limping. That pattern still continues. Later, we saw a flock in a neighbor’s yard a mile away, and one of them was limping. No doubt, it was Gobbles.

I grew up on a farm. I know all about animals as food, and animals as economic units. When we raised a new crop of heifers for the dairy herd, typically one of them would fail to get pregnant. No calf means no milk, and that means no money from that heifer. She would end up in the freezer as steaks and hamburger. That’s life on the farm.

I also know the flip side. I don’t want to tell you how many abandoned kittens I have bottle fed to save them. Both relationships are legitimate. Gobbles was somewhere in between. I never touched him, never fed him, never got closer than twenty feet from him. He remained a wild creature, but he came to trust me slightly, and I came to enjoy having him around. I miss him, but I am glad he is out in the wild, back with his flock, doing what wild turkeys are supposed to do.

And if, in a few months, the flock no longer has a turkey among them who limps, there will be two possible interpretations. Either he will have healed so completely that he can no longer be distinguished, or the coyotes will have gotten him. If that happens, my head will say coyotes, and my heart will say healed.