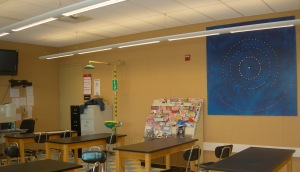 This is a follow up to the post 446. Until Proven Innocent. As I said then, my interest in guilt as a first assumption long predates current concerns about sexual harassment and abuse. Current events cause me to place this post at this time. It is an awkward coincidence that the long quotation appeared in Serial only last Thursday.

Where were you when the world ended?

That is the opening line from Symphony in a Minor Key, which is now appearing over in Serial. The hero of that novel, high school teacher Neil McCrae, is falsely accused of sexual misconduct with a student and his world as he has known it comes to an end. He moves to another school in another state to rebuild his life. This provides an underlying structure for a novel that takes him through one year of teaching sixth grade, mirroring what I was doing that year in the real world.

In my twenty-seven years of teaching, I saw all kinds of teachers. The vast majority were fine people. A few should never have become teachers. At least one male teacher had questionable behavior. He didn’t last long in our school, but small schools tend to be self-policing. I’ve also seen several absolute goons who came for interviews but were not hired.

No matter how good and kind and honorable most teachers are, not all teachers should be teachers, and every parent knows that. In my experience, no matter what kind of people teachers are, the first thing parents see is their gender. If you are male, life as a teacher holds a different set of expectations for you.

In this scene from Symphony in a Minor Key, Neil McCrae has been reading a paper in which a student tells about her life. He feels a deep emotional bond with her, but . . .

Rosa was one of the meek ones. She desperately needed for someone to hold her, and tell her she was good and pure and valuable.

Even if the shadow of Alice Hamilton’s accusation had not hung over him, he still could not have touched Rosa, or any of his girls. Carmen could and did, Fiona did when she was so inclined, Pearl mothered them all, and students came from everywhere to be hugged by Donna Clementi. But no student ventured near Glen Ulrich; and Tom Wright, young and friendly as he was, kept them at arm’s length.

Women teachers can hug and touch. It is expected of them. It is “motherly”. But let a man teacher touch his girls and he is a lecher; let him touch his boys and he is a homosexual.

It isn’t fair, but it is the way of the world.

That is how Neil sees the world, and since he is a kind of alter ego of mine, of course he is right. I don’t think things are going to change in that regard any time soon. And if I may make a prejudiced statement, they probably shouldn’t.

Being a male teacher of young people a strange profession. We tend toward carefulness that borders on paranoia. And since I am a writer first, with teaching as a life-long day job, I wrote a novel about it.