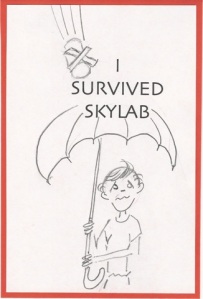 Over the last week, from local to national news, everyone has been commenting on the likelihood of being in the path of the falling Chinese space station. The chance of being hit by debris was one in a trillion, they said. My question would be, how did they ever find data to come up with that or any other statistical figure?

On the news Saturday morning I saw this interchange:

Well, the wait is over. The space station hit open water in the Pacific last night.

2 thoughts on “Look Out Overhead”