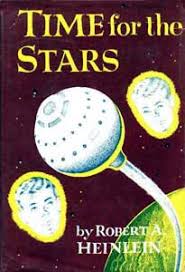 Yesterday (June 25) I had a request from a reader for advice on which Heinleins to read after Stranger and Starship Troopers. I replied that my favorites were Door into Summer for the old compact Heinleins, Time Enough for Love for the later, long-winded ones, and Time for the Stars among the juveniles.

The exchange reminded me of a post I had written but not published, because I had an excess of Heinlein related posts going at the time. Here it is, slightly updated and finally published.

Time for the Stars is one of my favorite Heinlein juveniles. I am using it here as a foil to Spirit Deer, in talking about core stories.

Spirit Deer was my first novel, written for adults but very short. I later stripped it of wife and adult friends, and turned into a juvenile. It appeared in Serial between June 5th and August 10th of last year. See 364. The Core Story and 398. Summing up Spirit Deer.

If you strip Time for the Stars and Spirit Deer both down to the core, and they are quest stories. The explorers on the torch ship Lewis and Clark are ostensibly seeking knowledge, but for the young communication techs (i.e. telepaths) that quest in inextricably bound up with a search for maturity. Tim, in Spirit Deer, is seeking survival, and a return to normalcy, but he cannot achieve that without finding maturity.

If you haven’t read Time for the Stars (and why haven’t you?), here is a brief summary.

Tom and Pat Bartlett are twin brothers who are part of an experiment to see if telepathy exists. They go along as a joke, and find that it is not a joke. The “secret language” they have used all their lives turns out to actually be telepathy. What they think other people can’t understand, they in fact cannot hear.

The discovery that makes this more than a parlor trick is that true telepaths can communicate long distances — proven as far as Pluto — and their contact does not show a speed of light time lag. Now relativistic starships can go out from star to star without having to return home to bring back their data.

Tom goes to space and Pat, the dominating twin, stays behind. Tom learns to assert his independence, especially as his stay-behind twin ages much more rapidly. The trip is grueling, the exploration dangerous, and eventually Tom returns home, still young while his twin has grown old.

That is all the summary I can give without spoilers, but how much do you need?

The voyage of the Lewis and Clark is a long trip away and a quick return. Tim, in Spirit Deer, has a quick plunge into the wild and a long return. They differ in detail, but the arc is home — away — home again.

There aren’t more than a billion stories with that arc, significantly including the Heinlein juveniles Starman Jones, Tunnel in the Sky, and Have Spacesuit — Will Travel, all of which are excellent. Upon returning home, these story’s characters characters are changed by their experiences. Jones’ life is most changed, with some losses and great gains. Rod Walker of Tunnel finds a career. Kip Russell of Spacesuit gets on with plans for his life, but his options are immensely augmented.

All four are Heinlein at his best.