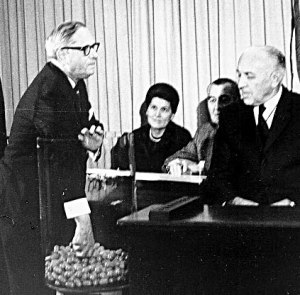 The place was a class at Michigan State University, just about this time fifty years ago. I wasn’t in the room, so I may be wrong on a few details, but the basic story spread quickly all over campus.

As you may guess, it left the room in an uproar. I’m sure the actual grades were given in the normal manner, but the young professor had made his point.

About a week later, a similar lottery took place nationwide, televised, and determined life or death for thousands of young Americans. I was listening closely, because I was a contestant. It was the first draft lottery since World War II.

There were three of us paying attention, my two college roommates and I. One of them didn’t have to worry; he had blown his knee out as a high school wrestler and was 4-F. That’s a medical deferment. The other roommate and I were on student deferments, but we were both going to graduate in June. He drew a high number and never served. I wasn’t so lucky.

I have said often that the draft leveled the playing field. It was a favorite saying in that era that Viet Nam was a war where black people were sent to kill yellow people for the sake of white people. Without the draft, that would have been even closer to the truth.

I wasn’t feeling so charitable when that bastard got to my birthday and pulled a 41.

Ain’t it fun to gamble in the big casino?