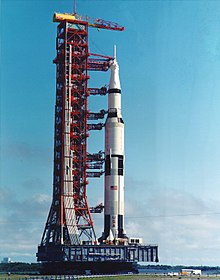 This post is called The Saturn Rockets, plural, because there were two if you speak loosely, or three if you are picky. If we were looking at all of the rockets of the Apollo program, we would have to add Little Joe. Getting men to the moon was a complex operation.

The Saturn rockets are often said to be designed from the start as space launch vehicles, not military missiles. That is a somewhat limited view. The program that eventually produced the Saturns began in 1956 and ran through an amazing number of paper iterations before anything ever left the ground. “Saturn” development was simultaneous with the developments of Atlas, Titan, and other military missiles, and kept changing as those other missiles refined rocket technology.

The same infighting family of scientists and engineers developed Saturn and all American military missiles, the same set of companies built them, and the same government paid for it all. Saturn was developed through NASA and was never planned to carry warheads, but the entire American manned space program was a child of the cold war. The civilian vs. military distinction is a bit of sleight of hand.

By 1959, the possible types of Saturn rockets had been reduced to eight configurations. Eventually three were built.

Remember Little Joe? That was an existing rocket that was used early to test out the Apollo capsule’s abort mechanism. 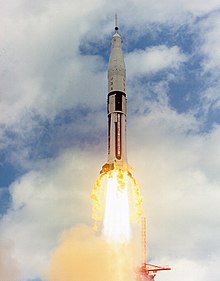 The Saturn I was replaced by the more powerful Saturn IB (shown at left) in 1966. Saturn IB became a workhorse for heavy, low Earth orbit launches.

The first Saturn IB topped by an unmanned CSM was launched in a mission then called Apollo 1. Later, after the deaths of three astronauts in the capsule fire, there was a mass renumbering of past flights in order to call their mission Apollo 1. It was an entirely understandable gesture, but it causes confusion to this day.

Two more Saturn IBs were launched in 1966, then the first Saturn V was launched. The next launch was to test an unmanned LEM in low Earth orbit. That flight fell to the Saturn IB which had been involved in the “Apollo One” disaster, since the capsule fire had not damaged the launch vehicle. Another Saturn V launch in 1968 completed the unmanned phase of Apollo.

On October 11, 1968, the first manned Apollo craft achieved orbit. Manned missions are what we all remember, but by that time there had been seven abort tests, sixteen launches of Saturn I, IB, and V vehicles, and twelve major ground simulation tests.

Apollo 7 was the only manned Apollo mission to use a Saturn IB. Apollo 9 was also a flight to low Earth orbit, but it used a Saturn V because it was  a full, close-in dress rehearsal and first launching of a manned LEM.

The other ten Apollo mission used the Saturn V, cementing a picture of that rocket into everyone’s mind.

After the end of Apollo, a Saturn V launched Skylab. Three subsequent launches of Saturn IBs took up the astronauts who manned it.

The last manned use of Saturn IB was to carry an Apollo CSM to rendezvous with a Soyuz vehicle in 1975.