In the original Mercury spacecraft, (shown here) the single occupant was in a closed space with all his supplies of air and, on longer flights, water and food.

Flights were short and maneuverability was minimal. There was no need to store large quantities of fuel or oxygen. The retrorockets which burned to return the craft to earth were outside the vehicle and behind the heat shield; this was also true on the Gemini craft.

On Gemini flights, the ability to maneuver was critical. Gemini was the program in which astronauts learned how to rendezvous and dock and how to perform space walks. (EVAs; extra-vehicular activities) Gemini was also designed to test the effects of long term weightlessness. There was a need to store large quantities of fuel and oxygen, so a section was added between the crew cabin and the heat shield. It was not accessible from the crew space. You can see it in the silhouette of the Gemini spacecraft shown here.

The trip to the moon would take plenty of breathing oxygen and maneuvering fuel, and a lot more besides. All this, and fuel cells for electricity, were crammed into the Support Module. It also had to act as another stage in the Saturn rocket. It had to have a large engine and fuel supply to use while entering lunar orbit, and when exiting lunar orbit to return to Earth. A comparison of the three photos will show that Mercury and Gemini had only retrorockets for return, strapped outside the heat shield, along with maneuvering thrusters you can’t see in the pictures. The bell of the CSM’s large rocket is clearly visible.

With Apollo, the heat shield was moved back to the base of the crew space. The Command and Support Modules were designed to be separated just before reentry. The Support Module burned up in the atmosphere while the Command Module was slowed by its heat shield before landing by parachutes. 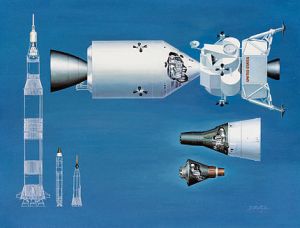 This poster from NASA shows all three spacecraft side by side, at scale, with the LEM thrown in as a bonus.

We’ll look at the Apollo 8 mission itself on Wednesday.