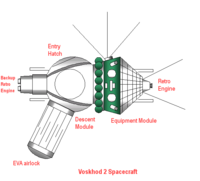 I posted this in 2016, under the title Spacecraft Threatened by Bears. The title was snarky but accurate. Back then I had few followers, so it seems time to post the amazing story again.

My admiration for the people of the early American space program is boundless, but the Russians were no slouches either. They were the first to perform many feats, including the first space walk, during the flight of Voskhod 2 on March 18-19, fifty-four years ago.

I had the great good fortune of living through the early days of manned space flight. I was nine years old when the Russians orbited the first satellite, and the early manned flights came when I was in high school. I watched every American launch with fascination and envy, but the Russian launches were shrouded in secrecy. I knew only the bare minimum that all Americans knew. I’m not sure the president knew much more.

During those early days, nothing was routine. Every mission was dangerous. They still are, of course, but not so much as then. American failures were there for all the world to see, while the Soviets kept their’s secret.

After the breakup of the Soviet Union, information about the early Russian space program became generally available, but by then few people cared. I did, and I sought out the stories.

Oceans are big targets and landing in water cushions the fall. That is why Americans always splashed down. The Soviets were unwilling to land their craft anywhere outside of the USSR for reasons of security. Their hard landings had an effect of the design of their spacecraft.

The first six manned Soviet spaceflights were aboard Vostok craft, which came down on land — hard. Vostok astronauts wore space suits throughout their flights and landed by personal parachute separate from the capsule. Before the second generation Soyuz spacecraft came on line, the Soviets launched two additional manned missions on modified Vostoks called Voskhod.

On Voskhod, an additional rocket was added to the spherical descent module to fire at the last minute. This softened the landing enough so the cosmonauts could remain within the descent module all the way to the ground. Since ejection seats were no longer used, the weight saving allowed Voskhod 1 to carry three astronauts.

Voskhod 1 cosmonauts flew without space suits, as did early Soyuz missions. Voskhod 2 cosmonauts Belyayev and Leonov wore space suits because they were scheduled for the first space walk.

American space walks first took place during the Gemini program (see post 87). That craft had two hatches but no airlock; both astronauts were in vacuum during the entire spacewalk.

To exit his Voskhod in space, Leonov used an inflatable airlock (see drawing above), leaving Belyayev in the craft and unable to aid him. I had known this for several years but just in the last few days found out why. Russian electronics within Vostok and Voskhod were air cooled. American electronics were not. This meant that if a Voskhod were opened to space, the electronics would overheat.

On Voskhod 2, Leonov crawled into the airlock, sealed the inner door and opened the outer one. Belyayev remained in the pressurized descent module.

For ten minutes, Leonov remained within the airlock but exposed to the vacuum of space, then he slipped free and floated on a tether for another ten minutes. He was called back in to terminate his space walk, and his difficulties began.