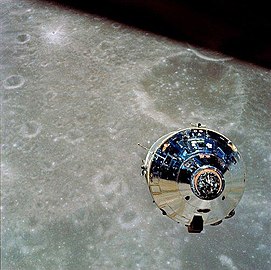 Apollo 10 CSM, viewed from the LEM in lunar orbit.

Apollo 10 is a mission that, from the outside, looks unnecessary. It was anything but that. To appreciate it, you have to project yourself back into the state of ignorance that represented best knowledge in 1969.

I was also guilty of underrating it when I taught middle school science. I called it the most frustrating flight in the history of space flight, which was half true and half exaggeration. I also called the Command Module Pilots NASA’s soccer moms because they got to go to the game, but never got to play.

You have to know your audience, and middle school kids are looking for excitement, not “slow and steady wins the race”. And certainly not “they also serve who only stand and wait.”

In actual fact, without Apollo 10, the would have been no moon landings. There were two basic reasons for this. The LEM had only been tested in low earth orbit, not falling into a gravity well and then clawing its way out again. And we had an entirely inadequate understanding of the conditions on the ground at the proposed landing site. We especially needed to fine tune our understanding of lunar gravity for navigation purposes.

As the NASA history website puts it, “a test of the landing radar, visual observation of lunar lighting, stereoscopic strip photography, and execution of the phasing maneuver using the descent engine” were all performed on Apollo 10’s pass over the proposed landing site. If you want more data, check also here.

On May 18, 1969 Apollo 10 lifted off from Cape Canaveral on its way to the moon. Thomas Stafford was Commander, John Young was Command Module Pilot, and Gene Cernan was LEM Pilot. They entered orbit of the moon three days later. Stafford and Cernan undocked the LEM and began their descent fifty years ago today.

John Young was left alone in the Command Module, the first of seven men who would fly around the moon solo while their companions dropped toward the moon’s surface.

Stafford and Cernan fired the descent stage engine to slow the LEM. There followed a long unpowered descent, a rapid flyby of the proposed landing site, and a rise back up to the level of the CSM.

The reports at the time called it a dress rehearsal for Apollo 11, but it wasn’t that simple. 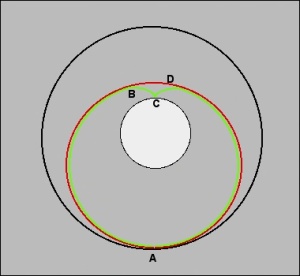 For comparison let’s look at a mission designed to land. At point A on the figure given here, the descent stage engine would fire briefly, changing from the black orbital path to the green one. At point B, a carefully calculated spot nearly half way around the moon, the descent engine would fire again. The descent from 60 miles to about 8 miles would have been in a flat curve, followed now by a very steep curve. The descent engine would continue to fire until the vehicle landed at point C. This is basically the exact reverse of a launch, as shown Monday.

Later, the ascent stage engine would fire, leaving the descent stage on the moon’s surface, and proceed along the second half of the green curve back up to the 60 mile level.

Apollo 10 (red orbit), on the other hand, passed over the prospective landing site and continued on.

This has always been called a dress rehearsal, so one would assume that the ascent stage would separate somewhere near the surface, fire its engines, and continue back up toward rendezvous separately from the descent stage. That’s what I thought for fifty years.

I was wrong. Imagine that. I probably learn more researching these posts than anyone does who reads them.

In fact, on Apollo 10 the descent stage fired again at point D (the red orbit represents Apollo 10), but it was merely a course correction, and the entire LEM continued up to the 60 mile level.

Apollo 11 would leave from the moon’s surface, starting at zero speed. Apollo 10 at its lowest point was at an altitude of 8 miles and a speed of 3554 miles per hour. Dress rehearsal was a considerable exaggeration. It wasn’t that reports were inaccurate; things were just more complicated than the summaries suggested.

It’s a little like science fiction novels. A two line blurb on the back of a 180 page paperback may not actually lie, but it can certainly give a false impression.

At point A on the trip back up for both missions another burn was necessary to get back onto the black curve. However, the CSM had gone its own way; it wasn’t waiting there for the LEM. The final rendezvous for the LEM and the CSM, which were at different places on roughly the same orbit, would be up to the pilot of the ascent stage, and would take an additional three hours.

That was the plan, but things didn’t entirely go well. Just before the separation, the LEM began acting up, corrected itself, then seconds later started a rapid roll. It was later determined that this was due to erroneous computer input. Stafford and Cernan quickly separated and regained control, but it was another of those close calls which could easily have led to a deadly outcome.

The crew rendezvoused and docked with the CSM, then returned to Earth. The ascent stage engine was fired again and went into solar orbit. The necessary data had been obtained for the moon landing in July.

At present, I plan for this to be my last full Apollo mission post. Everybody will cover the anniversary of Apollo 11. Everybody has already watched the movie Apollo 13, and I covered the other landings in 187. The Rest of the Landings. Of course, I reserve the right to change my mind.