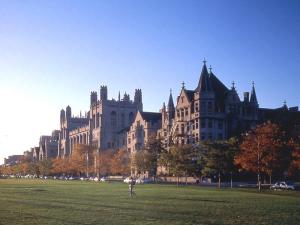 In the review of Louis L’amour’s memoir, a lot was said about self education, but that should not obscure the usefulness of college.

If you cut classes, sleep through classes, read digested notes instead of the textbook, and write merely adequate papers (or buy them), you can get all the way to graduation without learning anything. It takes some effort, but people do it every day.

On the other hand, if you recognize that your education is your responsibility, college will at least provide you with a reading list. And while you are in the stacks there is no telling what kind of other amazing additional things you will find to read.

Also, a few of the professors, at least, will have something worth listening to. I have had brilliant professors and professors who were dolts. You just have to deal with it.

There are grad students (I’ve met some) who were plowing their way toward a Ph.D. on pure inertia. Something got them started down that path and they didn’t have the imagination or courage to make a change. They can make it all the way to professorship with the help of other misfits from the last generation.

I left a town in Oklahoma, population 121, and arrived at Michigan State University in 1966. That year the campus had about 48,000 students. I loved it. I could walk down the street without everybody knowing me, and reporting back everything I did. (Sigh of relief!)

I started in biology, switched to anthropology, and concentrated on the cultures of South Asia. Just before graduation my draft number came up, so my diploma was immediately followed by four years in the Navy.

I next attended the University of Chicago, where I got an MA studying the interface between South Asian village economics and native theories of ritual purity. Title: Jajmani, an alternative conceptualization.

Obscure? You’d better believe it. Obscurity does not make a thing useless, but it does make it hard to talk to your friends about it.

Then I got blindsided by novel writing, but I’ve talked about that enough in the past.

The University of Chicago is a premier school. California State College, Stanislaus, which I attended a few years later, was known only to locals. The profs at Chicago were probably better scholars, but not better teachers. I got a good education both places.

CSCS is now CSUS. It was upgraded to a University a few years after I left. While I was there, I studied History, and received a second BA and second MA. Why a second set of degrees is a long story, to be told another time.

My thesis was “The Crisis in American Shipping and Shipbuilding: 1865 to 1918” That was an era of arguments about the role of tariffs and subsidies, with much testimony before Congress in which every competing party misrepresented the facts. Same old, same old. Teflon Don would have felt right at home.

To finish this quasi curriculum vitae, I went back to the University of the Pacific a few years later to get a teaching credential. It only required a few courses with all I already had on board. Everything I had done until then was from love of learning. I went to UOP purely to get a job so I could continue eating.

Everything I learned, everywhere I went, was useful to me as a teacher and as a writer. Over the next few months, I plan to pass on Reader’s Digest versions of some of it that might help you in your writing.

(Yes, I know most of the people reading this are or want to be writers, and more power to you.)