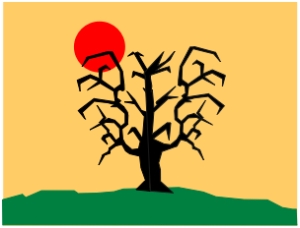 The background for this story is told in 636. Half Breeds, Various.

It was a long, cold afternoon, with spits of snow that were slow melting. There wasn’t any green left in the grass; it was all the crackly brown of late fall. The year was 1838; the month was somewhere in that no-man’s land where October slides into November on a path slippery with sleet.

Titus’s mare was holding out, but he was treating her with extra care since she had lamed up a week earlier. Somewhere ahead of him the main body of the displaced Cherokees was moving west, but he didn’t know how far behind them he was. He had been riding after rumors, picked up at wood cutters’ camps and isolated cabins since he left eastern Tennessee. Now he was tangled up in a canebrake, following a narrow, muddy trail that paralleled one of the many tributaries of the Tennessee River. It wouldn’t be long now until he reached the Ohio — he thought. He hadn’t been really sure of his location for days, and the low overcast sky didn’t help any.

He pulled up at a familiar churring sound, followed by a slithering in the leaves. Canebrake rattler, probably. Titus had lived around snakes all his life, but he had never gotten to like them. Even worse were cottonmouths. They didn’t even have the decency to warn a man before they struck.

It was getting on dark, and the fog was rising from the stagnant waters beyond the trail. He was two days hungry and there wasn’t a scrap of food in his saddlebags. Pretty soon his horse would not be able to find her way ahead, but there was no place big enough or dry enough to spread a blanket. The tall canes around him seemed to close in as the light failed.

He could smell the swamp. He thought of waterhorses and the sluagh, and all the other fairy creatures his Scottish mother had told him about. Those weren’t comfortable thoughts for a night this dark and cold, on a trail this uncertain, at the approach of All Hallow’s Eve.

Something erupted from the brush at his side and hurled itself scrawking into the air. An egret probably, or maybe a heron, but when he saw it for a moment silhouetted against the moon, it became a boobrie, come all the way from the lochs of the highlands to haunt the Scottish half of his soul.

Then he saw the light, faint, almost luminescent in the distance. Perhaps the light of . . .

Titus took hold of his imagination and put it firmly away. What he needed to worry about tonight were not creatures designed to frighten children, but men with guns and knives, and the intent to do a traveller harm.

He eased forward; the sound of his horse’s hooves was swallowed up by the soft ground. There was a spot wide enough for a simple camp, and somebody had managed to find enough dry wood for a fire.

Then the mare stepped into a puddle. It was a small sound, but the figure by the fire vanished. First he was there and then he wasn’t, and he didn’t leave even a hint of movement in the canes.

Titus froze in place. His rifle was in a scabbard at his knee, but pulling it out now might cause the trouble he was trying to avoid. He hallooed the fire in a low voice, but got no answer.

Titus kicked his mare in the ribs and started forward, pausing at the edge of the firelight. He called out, “How about welcoming some company. I’ve been riding all day and this is the first wide spot in the trail I’ve seen in hours.”

“I’m not going on in the dark. You might as well come out, unless you plan to stay squatting in the mud ’til morning.”

Still nothing, and a shiver ran up his spine. He wished he hadn’t been thinking of bogles. Then a voice out of the darkness softly called his name.

This story will continue on Wednesday and conclude on Thursday.