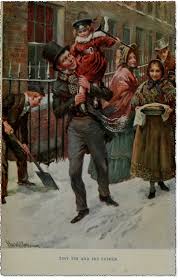 When I was a junior in high school, I was force-fed Great Expectations and it was the most excruciatingly boring experience of my young life. It put me off Dickens for years.

Maybe this Dickens fellow could write after all.

Somewhere in there, fully a decade before I became a writer, I started to want to write a Christmas book. That’s hard in a world where every other writer has the same idea. You see them on every book rack, paperback equivalents of made-for-TV movies, all asking, “will the girl get the guy by Christmas”? Really, they have nothing to do with Christmas, but that doesn’t keep them from being competition.

No one is every going to match A Christmas Carol, but to sit on the same shelf any book would have to meet a certain level of gravitas. And it can’t be a grumpy old guy who finds redemption; once Dickens got through with his version of that story, every other one would be pastiche.

Ultimately, I found my story, although I have not yet written it. In Philadelphia, in 1790, during the brief period that it was the American capital, Ethan Gunn, a merchant seaman, returns from a year’s long journey to find that his wife has died in his absence. His children were taken in by his brother, living inland, where they died in a house fire. (Or so he is told.)

It is Christmas time and the poor of Philadelphia are in great need. Gunn has money from his voyage, but he counts it as nothing compared to the loss of his family. Through a friend he contributes to those in need, giving us access to a series of brief views of the lives of a series of minor characters.

Gunn himself gains nothing from his charity, because he is not giving of himself. His only ties to humanity are his friend, and a seemingly orphaned girl he has rescued from a shipwreck and taken under his wing. She is of about the same age as his lost children; in trying to ease her grief at losing her parents he comes to love her.

Every scene of a poor family rescued from the brink by Gunn’s aid only drives him closer to despair. The seemingly final blow comes when the parents of the girl he has befriended turn out to have also been saved, and are looking for her. He faces his demons when he considers hiding her away to keep her for himself, then relents, and finally gives away the only thing that has real meaning for him.

Whereupon his own children turn out to have been living with a Moravian family after escaping from the house fire, and are reunited with him.

It’s the unwritten books that will haunt you.

Like Clockwork, which I finished about nine months ago, also owes a lot to A Christmas Carol. It isn’t a Christmas book, but it is Dickensian, and it owes it’s origin to a scene in Scrooge, the musical adaptation. I’ll tell you more about it on Wednesday.

Like Clockwork isn’t really my Christmas book but it is as close as I have come so far. It’s out looking for a publisher right now. Maybe by next Christmas you can see for yourselves.