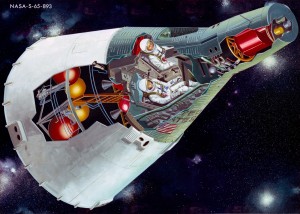 We left Gene Cernan hanging onto to the side of Gemini 9, part way thorough a disastrous space walk. I’ve provided a drawing of the Gemini to orient you to what comes next.

Cernan left the hatch and began to move back to the base of the Gemini, utilizing undersized hand holds. He was weightless, which makes this sound easy, but remember that bending your arm is like “bending and inflated life raft”. As he worked his way back, he had to thread his umbilical through undersized stand-offs to keep it from tangling. When he reached the base of the Gemini, he found it surrounded by a ring of torn metal, like razor wire, that was the result of separation from the Titan rocket that had put him into orbit. Just the thing a space suit does not need to make contact with.

Once Cernan made it past the turn to the very base of the Gemini, he faced new problems. He was exhausted and overheated; the inside of his visor was so fogged that he was nearly blind. Making visibility even worse, the light NASA had provided over the MMU was a dim bulb, completely inadequate to his needs. He began to attempt to fire up the MMU, a procedure that required about thirty switches to be thrown in sequence, but he could hardly see the switches, and every time he tried to turn a dial, his untethered body spun the opposite way.

Once the MMU powered up, he had to release and position the arms and get it strapped on. By now he was far overbudget for time, and out of contact with Stafford in the Gemini. His heart was beating at three times its normal speed, he couldn’t see for sweat and fog, and the Gemini was twenty minutes away from orbital night when the impossible becomes the unthinkable. Stafford terminated the mission. The MMU was abandoned, untested. Cernan made his painful way forward and returned, not without a final struggle, to the safety of the Gemini.

Let’s let Cernan speak for himself.

Why is floating in space and turning a few dials so difficult? Let me give you a couple of tests. Connect two garden hoses and turn on the water. Now, using only one hand, try to unscrew them. Or, hold a bottle of soda or beer at arm’s length, and using a single hand, remove the twist off top. For extra reality, run a mile before you start so you’re nice and tired, do it while wearing two pairs of extra-thick gloves and close your eyes to simulate being unable to see. Stand on your head while doing some of these things to resemble tumbling in space. You get the idea.

There is one kind of space walk that always works, called a stand-up EVA. If an astronaut simply stands up on his seat, with the hatch open, he has none of the problems Cernan had.

Gemini 10 began with a stand-up EVA. Later Michael Collins performed an umbilical EVA, successfully although not easily, using a hand held maneuvering unit similar to the one used by Ed White.

In Gemini 11, Richard Gordon performed an umbilical EVA to attach a tether to an Agena target vehicle. Like Cernan, he overheated, lost vision to a fogged visor, and had his EVA cut short.

In Gemini 12, Buzz Aldrin performed two stand-up EVAs, sandwiched around an umbilical EVA. For the first time, everything went right. Aldrin had use of larger hand and foot holds, a reduced workload, and tools designed to overcome the problems of weightlessness. The lesson learned by White, Cernan, Collins, and Gordon had finally made spacewalks practical.