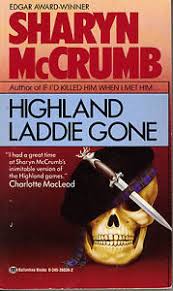 This is one of the fifteen that hit the sweet spot.

Of all the books on my best list, this is the weirdest, hands down. It sings, but its song belongs on a Ray Stevens album. Highland Laddie Gone by Sharyn McCrumb is the funniest book in history, or an incomprehensible mess, depending on how well you understand the backstory.

Which brings me to my backstory. I am not a Scot, but my wife is. Her mother, a Swede, became more Scottish than the Scots in pursuit of her husband’s culture. I learned to love bagpipe music and appreciate tartans from her. I also got into the habit of going to the local Scottish Games every year, where I found this book in a Scottish book stall.

The Scottish Games are an odd mixture of athletic events, genuine Scottish history, and romantic historical claptrap, with the last being the strongest element. I love them, but I am not fooled about how silly the whole concept is. I like the games like some people like Benny Hill.

The Highland Games are about as realistic as a bunch of modern Virginia women shucking their skinny jeans for hoop skirts and sitting around sipping mint juleps while their husbands reenact the Civil War — and that happens in this book, too.

There is also a Scottish marine biologist who has come over for the summer on a grant to study the ecology of the Chesapeake Bay, only to find out that the man paying the bills really wants him to study Chessie. If you don’t know, Chessie is the Chesapeake Bay equivalent of the Loch Ness Monster.

Our heroine, Elizabeth MacPherson is attending the Glencoe Games, one of the bigger venues. She is naive, slightly overweight, and in love with glamor but can’t quite pull it off. She solves mysteries, although the reader is left wondering how, and she has a wicked tongue for countering catty remarks.

The more I describe Highland Laddie Gone, the more I can’t believe it is one of my favorites. But it is jammed full of the humor of juxtaposition, both linguistic and cultural. There are at least five one-liners per page. Example:

When Elizabeth falls for the visiting biologist’s Scottish accent, she tells him, “I love your rrr’s.”

Taken aback, he replies, “Yes, your arse is rather nice, as well.”

Elizabeth knows the fake Scottishness of the games, but little about historical Scotland, and absolutely nothing about modern Scotland. Cameron, the visiting biologist, has never seen a Game and finds them incomprehensible; he has no interest in history, and all he want to talk about are modern Scottish sports teams. He and Elizabeth spend the entire book talking past each other, with hilarious results.

Then Lachlan, the dealer in fake genealogies and associated trinkets, is killed with a skian dubh, a ceremonial dagger. The call goes out, and the local sheriff is just over the hill at a Civil War reenactment. He tells his troops to stop being dead until he gets back, and heads toward the Game at a gallop in the full dress of a Southern cavalry officer. He sees the death weapon and says, “This will be easy. How many of these things can there be?” The attendees have to tell him that every one of the thousand kilted pseudo-Scotsmen has a skian dubh in his sock.

Elizabeth decides to solve the mystery, and all her friends push her this way and that, hoping she will find the clues they are directing her toward. Eventually, she does find the killer, but she never has a clue of what has actually been going on.

The  joy of this book is all in the one-liners. I’ve given you a few; there are hundreds more in HLG, but you might miss many of them if you don’t know the Games or the Reenactments.

If this sounds like fun, but you are only into science fiction, you might try Bimbos of the Death Sun or Zombies of the Gene Pool in which McCrumb takes on science fiction conventions.