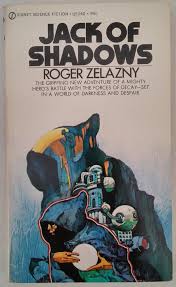 This is one of the fifteen that hit the sweet spot. Actually, almost anything by Zelazny belongs on somebody’s best-of list.

If you haven’t read Roger Zelazny, it’s time to start. The border between science fiction and fantasy is his domain, and nobody explores in better than he does.

Zelazny’s magnum opus is the Amber series, ten books detailing the story of Prince Corwin and his family and enemies — frequently the same people. You might start with Nine Princes in Amber, but then you will find yourself hooked, with nine more books to read before you can rest.

He also has a number of stand-alone novels, any one of which would be a proper place to begin to experience Zelazny. To name a few, in publication order:

There are also a half dozen between Bridge of Ashes and Eye of Cat which, in my opinion, don’t stack up to the rest. I’ve read and reread all of the above and a few more, along with numerous of his short stories. They always seem to be lurking in the Best Of . . . anthologies.

Isle of the Dead is probably my favorite among the stand-alones, followed closely by Eye of Cat, but as a recommendation for a Zelazny newbie I give you Jack of Shadows. It is close on the heels of the previous two in quality, and it is a more typical Zelazny. If you like Jack of Shadows as well as I do, you’re probably ready to take the big leap into the seemingly endless Amber books. Just make sure you don’t start out of order or it will drive you nuts. Check out the bottom of this post for details.

Jack, our (anti) hero begins his tale at his execution.

His planet is tidally locked with it’s sun like scientists used to think Mercury was. One side is constantly in day and the other constantly in night. Ah, you say, science fiction. Don’t jump to any conclusions. The daysiders are quite scientific, but the nightsiders are denizens of magic. Jack derives his power from shadow, so he is a creature of both and of neither, which is a very Zelaznyesque thing to be.

Nightsiders are immortal, but can be killed. Upon death, they are reborn in the Dung Pits of Glyve, which is at the middle of the nightside of the planet. That is where Jack finds himself shortly after the story begins, and the novel is basically the tale if Jack working his way back past innumerable enemies, to freedom, revenge, questionable redemption, and a cliffhanger ending.

Almost every review, and there are many of them, tells the whole story in brief. But why would you want to know if you plan to read it yourself? I won’t be party to cheating you like that.

If you decide to take the big leap into the Amber series, here is a list to keep you in proper order. There are two sets of five novels, the first being the story of Corwin:

The second set is the story of his son Merlin.

Neither set of novels comes to a proper conclusion. Zelazny was still writing them when he passed. We can imagine that he is somewhere in a luxurious room in Castle Amber, close enough to hear Random’s drumming, writing the ninety-second installment for the amusement of the immortals.

Aside for those old enough to have read Amber when it was being written: Did anybody else out there think the title of book one was a mashup of Nine Princes Waiting and Forever Amber and the second book title a spin on The Guns of Navarone, three best sellers of that era? Considering Zelazny’s sense of humor, it could be.