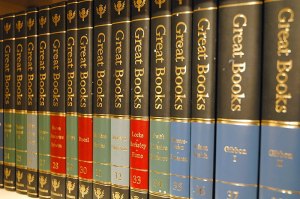 The Great Books of the Western World.
Taken 16 February 2005 by User:Rdsmith4

“Here are the most admirable and varied materials for the formation of a prig.”      James Payn, speaking of the Great Books of the Western World.

A prig (in case you didn’t know) is a self-righteously moralistic person who behaves as if superior to others.

If Aristotle said it, it must be true, right? Maybe. Of course, Aristotle’s ideas about physical science held Europe back from progress for a couple of millennia, so maybe not.

According to Aristotle’s view of forced motion (as opposed to natural motion) a body would stop moving when applied forces was removed. This caused his followers much work trying to explain why an arrow didn’t stop moving as soon as it left the bow.

I think we can cut the old guy some slack. Pioneers never get things completely right. On the other hand, too much reverence for old things can really slow progress. Case in point: The Great Books.

When The Great American Read hit PBS, it sent me looking at some old lists of great books, although, to be fair, the GAR was not about great books, but popular books, which is a whole different perspective.

Among the books of lists I checked out was A Great Idea at the Time by Alex Beam, about Encyclopedia Britannica‘s Great Books of the Western World. That consisted of fifty-four volumes containing 443 works by seventy-four authors, all dead, white, and male. I recommend Beam’s humorous look at the intersection of prissy scholarship with American huxterism.

Meanwhile, let’s look at the same issue from a broader perspective. There is a prejudice among the educated that finds wisdom only in great or serious books. If Charles Dickens says it, it is wisdom. If Gordon Dickson says it, it is entertainment.

I don’t buy that. Never did. Don’t plan to in the future. I stand with Brian and Mike Hugg’s song You’re A Better Man Than I . . .

Could you tell a wise man
By the way he speaks or spell
Is this more important
Than the stories that he tells.

While I was researching all this, I ran across a Goodreads review of one of the books I had mentioned, The Novel 100, which included this sentence: “It contains a lot of my own personal favorites, while also including books that I should read.”

Should? Why should? Why read the Great Books, and for that matter, why capitalize them as if they were the Holy Bible?

Robert Hutchins, who was instrumental in producing the Great Books of the Western World (in part to make Great Profits), put it this way:

Until lately the West has regarded it as self-evident that the road to education lay through great books. No man was educated unless he was acquainted with the masterpieces of his tradition. There never was very much doubt in anybody’s mind about which the masterpieces were. They were the books that had endured and that the common voice of mankind called the finest creations, in writing, of the Western mind.

Yeah, right! If it was so “self evident” why was there such a giant fight to decide which books were great enough to go into the Great Books of the Western World?

In terms of ubiquity in the works of later writers, the greatest of the Great Books was the Bible. Adam, Eve, and the Garden — you might be Charles Darwin, and those names and their implications would still be understood. Only Shakespeare comes close to such instant recognition.

Today, it would be hard to find any author with recognition that is both widespread and lasting. Maybe Tolkien; maybe not. There are plenty of writers that everybody reads today, who will be forgotten in a decade. There are probably a few authors whose fame will never die with a small group of readers, but that would  be hard to nail down.

In the “good old days” there was a bit of unanimity on quality (less than Hutchins would have you think), but today’s society has opened outward to diversity in such a way that, while there will always be great books, there will probably never again be Great Books.

Greece and Rome may lie at the foundations of Western Civilization, but really, who has more to offer modern America, Marcus Aurelius or Maya Angelo.