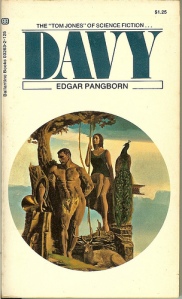 This is one of my best stories series.

I re-read. It is my equivalent of brainless television. There are books that I frequently re-inhabit in order to once again enjoy the people, scenery, and action.

There are also books I read only once, and never need to read again. They become such a part of me that I still remember them decades later.

Edgar Pangborn provided two such books, Davy and The Trial of Calista Blake. I read each of them only once, between 1964 and 1967. I have never forgotten them, nor have I ever wanted to return to them. They were life changing, if read at the right age.

I grew up in an era of fear. The bomb hung over us all, and fiction followed the trends of the day. Speaking from memory, not scholarship, it seems to me that it was the end of the exclusivity of science fiction. Events that would have once interested only the few and the faithful, were turning up on the best seller list. Books like Fail-Safe and On the Beach were called science fiction, and I suppose technically, they were. But they didn’t taste like science fiction because they were written by mainstream writers with different sensibilities. That may not be a legitimate complaint, but in truth they tasted like steak with no salt.

The flip side of the here-comes-the-bomb novels was an endless cavalcade of post-holocaust dystopias. The first book I read, the first day I discovered libraries, Star Man’s Son by Andre Norton, was one of those. There were dozens to follow; maybe hundreds. They mostly ran together in a mass of future sadness, but a few were memorable.

We spend much of the book watching Davy go from ignorance to knowledge. The cover of the edition I read compares him to Tom Jones (the novel, not the singer) and that seems fair.

Davy’s world is the northeastern United States, a couple of centuries after the nukes fell. The names are scrambled but mostly decipherable. The state religion is the Holy Murican Church and belief is not optional. Davy falls in with anti-religious dissidents, which suits his doubter’s personality.

The novel is carried by Davy as a questioning, ebullient youth, but saved from silliness by a brooding feeling that all will not be roses. The story arc makes everything work. We see young Davy growing up as told by his older self, but we are spared the works of his maturity. There will be striving, battle, despair, and betrayal when the mature Davy attempts to mold the world to his liking, only to have it fall apart in his hands. That is the part of the story another novelist would have concentrated on, but we see it only in brief flashes. Then we are at the final chapter, a kind of coda in which Davy totals up his gains and losses and prepares for a final, hopeless journey.

What we have here is the joy of youth, overlain by the elegiac sadness of hopeless struggle against human inadequacy. Heinlein could have written it, but it would have had little heart because his protagonist would have stood above the fray, superior to the mass of humanity. Davy partook of the same human conditions that he fought against. Just like the rest of us. That made Davy stand out as something better that the rest of the dystopias. It made the novel a work of art to move the soul — at least if you read it at sixteen, while waiting for the bomb to fall.