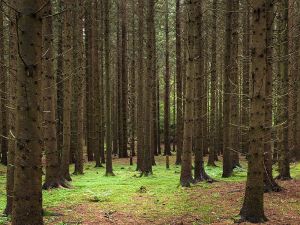 Since summer, I have been working on reviewing the fifteen novels I chose as my favorites, and one thing has emerged. They nearly all have a rural or wild setting.

The exceptions are Heinlein and the Lensman series, both of which take place in completely civilized futures, and Dickens’s Christmas Carol, with its pre-modern urban setting.

Davy Balfour spent his adventure crossing wild Scotland, and Roy Craig fought a wilderness so fierce that it threw off human domination.

Highland Laddie Gone takes place in modern America, but in a rural setting where the protagonists are pretending to recreate ancient Scotland. Part of A Prince of the Captivity takes place in an urban setting, but its soul and much of its action take place on an icecap, in the Alps, in the wasteland of war, and in wild places that exist only in Adam Melfort’s imagination.

If this were just my weird preference in books, it wouldn’t be worth a post, but it is much more than that. It is a reflection of recent history.

Americans went to war in the forties. Those who came back changed the world. While England languished, half crippled as a result of the war, America exploded into the future. Freeways, cars that looked like jet planes, and housing tracts all emerged. Stamped tin toys were out; plastic was in.

The past (westerns were everywhere) and the present (endless spy stories) fought for dominance as the paperback revolution swept the nation.

While America was rushing forward technologically and outgrowing its landmass, some of the former generation were looking backward. A lot of young writers were looking to the future and seeing a post-nuclear age of Armageddon that was a replay of bad times past.

Some turned to fantasy. Ballantine gave us masses of books dug up from the actual past of literature, portraying pasts that never were, but which we all thought should have been. Tolkien became the king of backward looking nostalgia.

Two-thirds of my fifteen favorites were drawn from this anti-urban movement.

I grew up on a farm, but most of my generation was urban. And rich, in comparison to any previous generation of youth. And they had the pill — which changed life a lot more than computers ever will. Sex, drugs and rock and roll. I missed all that, back in my Baptist-farmer world.

Then I got to college. I went from being marginal to my home town to being a marginal hippie. I agreed with most of their ideas, but I had no confidence that they would pull them off. And they didn’t. They stopped the war, but it wasn’t a clean victory. Nixon kept Viet Nam on life support long enough to win a second term.

By that time a new craze had hit; everybody wanted to go back to the land. I had waded through too much cow manure to buy into that.

I eventually went back to the land in a different way. I retired from teaching and bought a house on three acres in the Sierra foothills. Here I can see turkeys, deer, coyotes and an occasional bobcat walk past the picture window of the air conditioned shed where I write. I don’t raise crops, just novels.

A decade after the back-to-the-land crew had moved back to the cities, I wrote a novel, Raven’s Run, and put my opinions into the mouth of one of my characters, Rusty Dixon. For the record, he cusses more than I do.

Then along came the sixties. Some of us went off to Viet Nam and landed in pot heaven. Other kids my age went down to the cities and became hippies. When all that peace and love shit started to fall apart, a big bunch of hippies, lots of them from San Francisco and L.A., decided the new big thing was to go ‘back to the land’. ‘Course most of them had never been on the land, so they weren’t really going back to it. If they had, they’d have known better. I mean, I never saw any kid raised on a farm that went in for that shit.

It doesn’t take much insight to realize that the back-to-the-land movement, as well as Tolkien and his imitators, were moved my the same impulse. The modern eco-generation is singing the same tune, whether they understand it or not. It is a universal human hymn. For all of them, the future looks bleak and the past looks better than it really was.

Personally, I still have more faith in the future than in the past, but that twenty year spree of fine anti-urban and fantasy novels that came after World War II is still a pleasure to read.