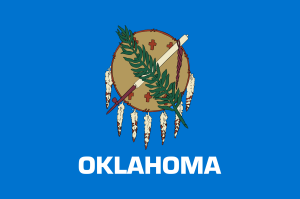 I was born in Oklahoma, a land on the edge of the South and also on the edge of the West. It was the land of the Indians, but you wouldn’t know it from the power structure. Its flag honors 60 tribes, but the whole place is pretty damned white. During my childhood, it wasn’t a great place to be a Black, a Jew, or an Indian.

Some say Oklahoma fought on the side of the South, but that isn’t accurate. Some Indian tribes living there fought against the Federal government, and they had reason, but the white folks who came in, took over, and dominated the new state of Oklahoma came from both north and south, long after the Civil War was over.

Kansas did fight for the North, and soon after the Civil War it had become culturally eastern. It was a place where the eastern cattle buyers bought the herds driven up from Texas, and where the immigrant sodbusters set up their farms. Dodge City, Abilene, Wyatt Earp, you know the story.

Texas fought for the South and right after the Civil War it began sending herds of cattle north to the newly built Kansas railroads. They left Texas scrawny and arrived at the railhead fat, working their way slowly northward while eating free grass.

Bear in mind what lay between Texas and Kansas — Indian Territory which would later become Oklahoma. I.T. was the dumping ground for disenfranchised Native Americans (see 247. The People’s President), and it was their grass that fed the cattle, which made the cattle owners rich, made the railroad owners rich, and fed the people in eastern cities.

Pretty soon railroads like the KATY were cutting across Indian Territory itself. That was the nickname of the MKT, the Missouri, Kansas and Texas. It started in Missouri (barely) but primarily it linked Kansas with Texas. The land between was still called Indian Territory, but more and more whites were moving in, often to railroad towns, and the tribes were rapidly losing what hold they had over their new homeland.

My paternal grandparents were both young when they separately moved into Oklahoma, while it was still Indian Territory. My grandmother liked to tell tales about getting her mail addressed to K2C, IT. In modern English, that’s Catoosa, Indian Territory. Even though this was long after the great cattle drives, my grandfather still herded cattle on horseback. Someone in the family still has a photo of him in wooly chaps, hat, boots, and six-shooter, looking like Sam Elliott. My maternal great-grandfather was a locomotive engineer on the railroads that opened up the territory.

Piece by piece, the Native Americans lost the land they had been granted when they were forced out of the Eastern United States. Whites moved in and Oklahoma was born in 1907. I came along forty years later, a year after my father returned from WW II.

When I was young, we had our own version of rich and poor, but it was a mild form of The Great American Malady. Ranchers wore Stetsons and cowboy boots, had horses and drove Cadillacs. Farmers wore ball caps and laced up work shoes, did not have horses and drove pickups, usually old and rusty ones. We were farmers, although my Dad finally treated himself to a Stetson when he was well into middle age and wore it to church every Sunday after that.

By the time of his death, and even more rapidly a few years later, the land and culture of my youth and his adulthood disappeared. Our farm no longer produced grain and milk, but was subdivided into toy farms for people who worked in Tulsa, but wanted to breathe clean air on the weekends.

By that time I was gone. I left Oklahoma in 1966 and rarely returned, but everything I have written since is filtered through memories of that place. I suspect every other writer could tell a similar story.