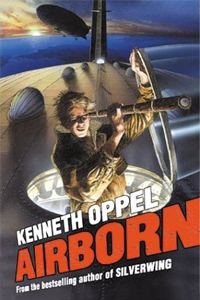 That pretty much screws up 1 Corinthians 13:11. And it isn’t exactly true. When I was a child, i.e. about twelve, plus or minus, I read what was available, and it wasn’t always great. It was primarily science fiction and mysteries, by which I mean Tom Swift, Jr. and the Hardy Boys. You could buy them in a toy and hobby store on the main street of Coffeeville, Kansas, one of the towns we shopped in. There were no bookstores; there were libraries, but I didn’t know that yet.

The Stratemeyer Syndicate, which ground out novels for kids like Hershey’s grinds out chocolate bars, was actually the best thing that ever happened to rural American youth for most of the twentieth century. I read them, my grandfather read them, and kids were still reading them when the millennium rolled over. They weren’t very good. In fact, a lot of them were terrible, but they were there. For a kid out in the sticks who liked science fiction, the choice wasn’t Tom Swift or something from Arthur C. Clarke. It was Tom Swift or nothing.

When I started going to libraries a couple of years later, my possibilities were expanded, but it was still a small library. I read a lot of things that I would never have touched if more had been available. I read a lot of books meant for adults, but that’s the goal anyway. I also read books way below my level, because they were there.

I recently remembered a book I hadn’t thought about since those days, The Wonderful Flight to the Mushroom Planet by Elanor Cameron. I was too old for it when I read it, but I still loved it, so much that I tried to find it again. No luck, but I did get a copy of the sequel.

I couldn’t read it. I could barely read it when I was thirteen, but if I had gotten to it when I was eight, I would have been in love.

That got me to thinking about what makes book a juvenile, as they were called then. The Mushroom Planet books would not have qualified. They were for children. Juveniles were for boys who were anxious to become men.

Of course there were juveniles for girls, but girls and boys were separate species in the fifties, so I can’t report on their books.

Heinlein did a lot of juveniles which I’ve already talked about. (See posts 311 and 513) My real favorite juvenile writer was Andre Norton, and I’ve done a few reviews on her as well. (For science fiction see posts 262 and 263, or others see posts 260 and 261.)

What Heinlein, Norton, and many other juveniles authors had in common was that their characters were not yet adults but were given adult roles by the author. The Heinlein characters were often learning a futuristic trade under an adult. Norton’s characters were often being stranded on an alien planet. Outdoors and with no other kids in sight — she was channelling my childhood.

Today’s young adult books seem to be quite different from yesterday’s juveniles. First, they are targeted for slightly older audience, and second, 2019 isn’t 1959. The audience itself is different.

I wouldn’t want to be a modern kid, and I understand why the books of my childhood probably wouldn’t mean much to them.

I taught middle school for twenty-seven years and I tried to keep abreast of what was available for my students, but I’ve been out of that loop for a while. I used to go to every Scholastic book sale to see what was new and good. The answer — damn near nothing. The few good books the kids had to choose from were mostly reprints from way back when.

Those book sales were where I found Fog Magic by Julia Sauer. It’s a wonderful book but it was published in 1943. Later I found A Storm Without Rain by Jan Adkins published in 1983. That’s still almost four decades old. Both were time travel stories of the old style; that is, without a time machine. The kids just went back in time and never understood how it happened.

I also stumbled across a fine steampunk novel, before I really knew anything about steampunk. That would be Airborne by Kenneth Oppel, published 2004. At least we are getting into the right millennium.

Harry Potter? Tried it, couldn’t read it. Twilight and the Hunger Games? Don’t want to, and if you don’t know why, I could never convince you.

Good books for kids are rare. Fortunately they stay around forever.

Why didn’t I mention A Wizard of Earthsea? You can’t pigeonhole it as a juvenile or a young adult book. It’s literature. Buy it for your kids and read it yourself.