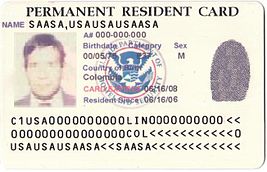 Just before Christmas, I wrote a post from the viewpoint of a little Mexican girl, born in the US, whose parents were about to be deported. I received a comment suggesting that the problem was caused by Mexicans breaking the law. I posted that comment because everyone has a right to his opinion.

Why don’t Mexican immigrants just follow the law? I’m no expert, so I did a bit of research. Here is what it says on the Homeland Security website.

Because more people want a green card than there are visas available, not everyone who wants a green card can get one immediately. Therefore, some people have to wait in line until a visa is available. The U.S. Department of State (DOS) gives out 140,000 employment-based visas each year. . . . Currently, about 234,000 people have employment-based adjustment of status (green card) applications pending in the United States and are waiting to get a visa.

And from the site of the North American Immigration Law Group:

Each application must also be supported by evidence that the alien will not become a public charge.

That suggests the applicant has to already have an employee, or has to be rich.

According to information scattered through half a dozen websites, the wait for a visa can easily take up to nine months. I can’t credit this to an official source, so call it a strong rumor.

Okay, let’s say you have a visa? That gets you over the border, but to stay, you have to apply for permanent residence. So what does that application look like? Here are some excerpts; you can download a PDF if you want to look at the whole thing.

List your present and past membership in or affiliation with every organization, association, fund, foundation, party, club, society, or similar group in the United States or in other places since your 16th birthday. Include any military service in this part. If none, write “None.” Include the name of each organization, location, nature, and dates of membership. If additional space is needed, attach a separate sheet of paper.

Have you EVER been a member of, or in any way affiliated with, the Communist Party or any other totalitarian party?

Have you EVER received any type of military, paramilitary, or weapons training?

These are a few of the most egregious questions found in five tightly packed pages of questions. It looks a bit like an IRS tax form on steroids.

If you were a Mexican doctor or businessman facing this document, you would set down for a hour with your lawyer and all would be well. But what if you were an uneducated, non-English-speaking farm worker?

Trump wants to build a wall. There is already a wall, built of paper, keeping poor and uneducated Mexicans from legally entering the US, and sending them across the border illegally to find work to feed their families.

This post is only a first look at a process full of complications and permutations. I’ve followed the paper trail as far as I care to. Knowing the full story of any government program would take a lifetime, and I have other things to do. But I have one more question to ask:

Is the system set up this way to turn Mexican laborers into virtual slaves, afraid to speak up from fear of the INS? No one can answer with certainty. But we can suspect, and I do.