Back in 2015 I started serializing things I had written. There have been novels, short stories, novellas, fragments, essays, and how-tos. First they came five days a week and later four days a week. All in all, I estimate that there have been between 700 and 800 posts in Serial, but I’m not going to count them. That would be too much trouble.

It has been three years, almost to the day, and I’m out of stuff.

I considered serializing Harold Goodwin’s Rip Foster novel. It is in public domain and I would love to introduce it to a new generation, but I decided against it, at least for now. Serial has been almost entirely mine, and I don’t want to screw that up. I could see serializing a series of public domain classics, but I doubt that I will.

I have two old novels, recently updated, which are out looking for a home. I have a new novel doing the same, and I see the completion of another new novel on the close horizon. None of those will appear in Serial since I am committed to seeing them published in the normal fashion.

There will be others, as well. I plan to keep writing until they nail the lid down.

I am not closing Serial. I can see several possibilities that would place more writing here at some time in the future, but none of them are likely to occur soon. So I am declaring a hiatus, not an end.

I’ll leave you with a picture of Snap working at his bench, in the shop called Like Clockwork. That’s the same as the title of the novel that is nearing completion. 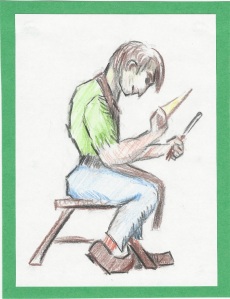 Snap is still working, and so am I.