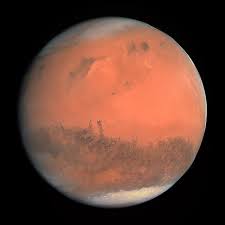 First a note on timing. My normal Wednesday post will be pushed forward to Thursday to coincide with the fiftieth anniversary of Apollo 12.

I was a bright kid in a very small school, so sometimes they cut me some slack. In 1964 I was allowed to take both junior and senior English because there wasn’t much left for me to take, and they knew I was such a nerd that all I would do with this unexpected freedom was study harder.

As a result, I took senior English a second time the following year, not because I needed it, but because what else were they going to do with me? That was the year I wrote a long paper on “The Probability of Life on Mars”, based on such things as the advancing and retreating color changes during the Martian year. The scientists speculated on tough, low growing plants; I suggested tall grasses, because the changes persisted despite all those dust storms.

Then NASA sent out all those probes and took all the fun out of the solar system. Suddenly Venus was not a swamp where dinosaurs might lurk and if you wanted to dream of running your feet through alien grasses you had to go on out to planets around other stars.

Now exoplanet research is taking away the nearby stars from the realm of the imagination, and dropping them one by one into the crucible of reality. A pox on all your probes!

There is a reason for this rush of nostalgia. I love science fiction and I have been writing it for decades, but nothing has given me half as much pleasure as the books about space exploration I read when I was young. The good ones, that is. I’m going to provide an annotated list on November 18. It will be too long to append to this post, and the post between will be taken up by the fiftieth anniversary of Apollo 12.

For years now, I’ve wanted to write some new space exploration juveniles/YAs, and I have worked out a few possible plots, but nothing seems to work for me. I also don’t see any good ones coming from anyone else. If you know of any, let me know.

I do see a lot of nostalgia. One fellow is writing a series of reimagined Tom Swifts, disguised as fan fiction for legal reasons. I won’t name him in hopes that he will continue to fly under the radar. I tried one and they aren’t bad.

George R. R. Martin and Gardner Dozios have produced a pair of anthologies of new stories in the old style called Old Mars and Old Venus. John Michael Greer and Zendexor have a similar anthology called Vintage Worlds. I won’t be reading them since I have long since lost my taste for short stories, but I don’t see anything similar in juveniles — except for the one mentioned above which the courts may remove any moment.

Anyway, nostalgia isn’t the path to take. Today’s kids aren’t yesterday’s kids, and nostalgia is for my generation. What we need is juvenile/YA space exploration literature as good as the best of the old, but modern in outlook.

In one sense, it is remarkable that we don’t have a hundred good space exploration juveniles each year. Even the best imaginations of the past could not begin to equal what NASA has actually discovered in the last decades.

Perhaps the best thing to do is evaluate what worked then, that doesn’t seem to work now. These are the things which come to mind.

Most of the older books I loved were written before space exploration was a reality; only a few were written as things were happening. The death of exploration in 1972 has to be part of the problem, since the space shuttle and ISS were basically just politics, not exploration, IMHO.

All of the young protagonists in those old books wanted to become adults in a futuristic world. The need to become an adult — or at least get out from under the thumb of adults — hasn’t gone away, but the futuristic world doesn’t seem as accessible or as exciting as it once did. Dystopia rules the day, but that won’t last. It never does.

Education isn’t helping. Kids now put together robot kits that are no more individualistic than their soda and vinegar volcanoes used to be. What joy is there in that? Robots used to be laughed at, but kids still made them out of cardboard boxes and goldfish bowls. Now they are prepackaged and shoved down kid’s throats in middle school.

In the old stories, there was intelligent life everywhere in the solar system, and it seemed like those young people couldn’t step out of their ships without finding a new or lost race. Now there may be bacteria under a dozen miles of ice.

The old spaceships worked. They got places quickly. They didn’t have to put up with the utter stupidity of trying to explore the solar system in craft depending on burning gasses, essentially no different chemically from your kitchen stove. See post 402. Nuclear Spacecraft.

I’m sure that someone is going to solve this conundrum and there will be good new space exploration juveniles/YAs for another generation. I’m equally sure that they won’t be written by old fogeys. The people who will write them are in their teens and twenties now, and I hope they hurry, because I want to read them.

My, my, how strange is life. I finished writing this post late afternoon of Oct. 7th. When I turned my computer on the following morning, the new EDGE newsletter was in the inbox. (EDGE published Cyan.) They were advertising a new book, The Rosetta Man by Claire McCague. It appeared to be a juvenile/YA. At least one of the quoted reviews said it had a “well crafted story, amazing hero’s and not one ‘bad’ word or adult activity!”

So I bought it and started in. It isn’t a juvenile/YA because the protagonist is an adult. That is a critical point that was simply assumed in the post above. It is good clean fun; it reminded me in that way of Michael Tierney’s To Rule the Sky. Either of these would be great for kids, but they aren’t juveniles. Perhaps we need a new category. Let’s call it IETCNHAAA, which stands for Innocent Enough to Cause No Heart Attacks Among Adults.

Then again, maybe not.